Development of the first high-performance inductors from intercalated graphene is shortlisted among the top five contenders from the materials section of Physics World 2018 Breakthrough of the Year.

After 200 years of dominating electronics, magnetic-based inductors have a rival that may allow smaller and denser device architectures. Researchers in the US, Japan and China led by Kaustav Banerjee have made the first high-performance inductors from intercalated graphene that work in the 10-50 GHz range, thanks to the mechanism of kinetic inductance.

While magnetic inductance relies on device geometry, kinetic inductance is purely a material property that makes higher inductance densities possible. As well as applications in sensors and energy transfer, inductors are key to the RFICs and RFIDs used in the Internet of Things – which promises to connect us with 50 billion objects by 2020, with a potential impact of $2.7 to 6.2 trillion per year by 2025. 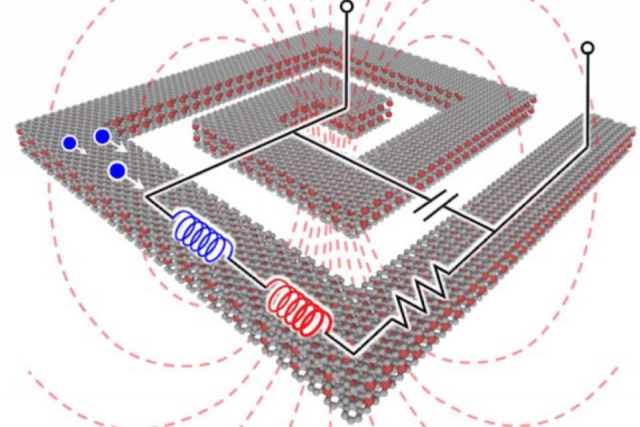 Featured image: A spiral inductor and its simplified equivalent circuit.

Other nominees are "‘ Mott insulator behaviour and high-temperature superconductivity in pristine bilayer graphene", " graphene electrons in (0+1) dimensions can model the dilation gravity of a black hole" and " exploiting the electrochemical properties of carbon fibres could drop device masses by as much as 50%.