Junkai Jiang receives prestigious Ph.D. Student Fellowship from IEEE Electron Devices Society. He is the only student from the entire Americas and the third member from NRL who has won this award. 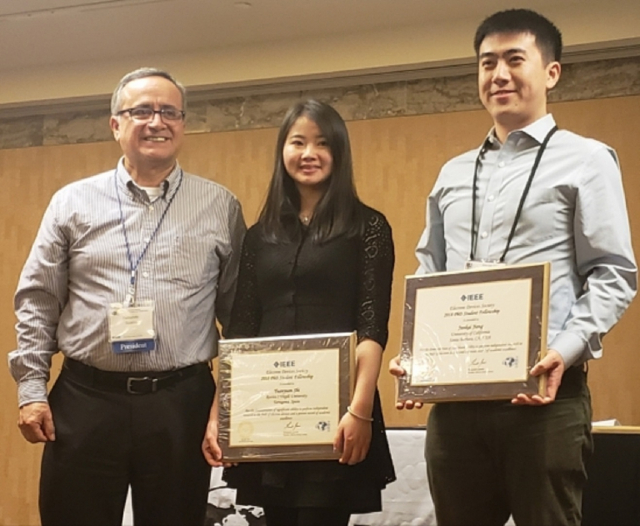 From UCSB The Current:

The steady improvement of the performance and versatility of our electronic systems is due in large part to the scaling-down of transistors and interconnects that drive them. Components on the chips have been shrunk, stacked and more densely packed to add increased functionality without expanding the systems’ small footprints.

But the smaller, denser arrangements present their own set of challenges, and electronics engineers and designers everywhere are trying to find ways to overcome the resulting degradation in performance, reliability and energy efficiency.

UC Santa Barbara doctoral student Junkai Jiang is one of those people, and for his work he has been awarded a prestigious Ph.D. Student Fellowship from the Institute of Electrical and Electronics Engineers’ Electron Devices Society (EDS).

“The IEEE EDS Ph.D. Student Fellowship is one of the most prestigious awards for doctoral students working in the broad area of electron devices,” said UC Santa Barbara electrical and computer engineering professor Kaustav Banerjee, who is Jiang’s advisor. Junkai’s achievements in his research are certainly most deserving of this honor.”

A leader in the field of nanoelectronics, Banerjee is internationally recognized for his pioneering work on 2D materials and electronics. Jiang joined Banerjee’s Nanoelectronics Research Lab (NRL) in 2012 as a dual M.S./Ph.D. student after completing his bachelor of science degree in microelectronics at Peking University in China.

“I am extremely honored to receive this prestigious award from the IEEE Electron Devices Society that recognizes technological innovations by young Ph.D. student researchers,” Jiang said. “Being the only student from the entire Americas and the third student from the NRL at UC Santa Barbara to receive this award, I would like to especially thank my advisor, Professor Kaustav Banerjee, not only for his constant encouragement and support, but also for his inspirational guidance to identify and pursue cutting-edge research of the highest caliber, which helped me to progress steadily during the past several years of my doctoral research.”

Jiang’s work centers on interconnects — the conducting channels of electronic signal and power between and through components. Interconnects play a dominant role in determining the performance and power-dissipation of all integrated circuits, including state-of-the-art microprocessors. As the dimensions of on-chip components have scaled down and their number has increased, the conventional copper wire interconnects have also had to shrink, causing them to hit limits in terms of their ability to conduct signal and power rapidly, reliably and without interference. As a result, the systems may slow down, overheat and drain their batteries sooner than expected.

The answer to this problem could come in the form of graphene, a two-dimensional form of carbon with interesting and valuable electronic properties.

“My research is focused on designing and fabricating fast, energy-efficient and highly reliable on-chip interconnects and passives uniquely enabled by low-dimensional carbon nanomaterials such as graphene,” Jiang explained.

Graphene, with its atom-thick dimension and electronic conduction properties, has emerged as a viable replacement for copper wire interconnects primarily driven by Banerjee over the past decade. But its ability to revolutionize modern electronics is directly related to the ease of large-scale manufacture, which also is a thrust of Jiang’s research.

“Supported by this award, I have been working on integrating graphene in the high-volume-manufacturing friendly or ‘CMOS-compatible’ process and its application in demonstrating a multilayer VLSI (Very Large Scale Integrated Circuit) interconnect scheme to establish its feasibility for the semiconductor industry,” Jiang added.

“I offer sincere congratulations to Junkai Jiang for receiving this prestigious award, and to Professor Banerjee for the support that is indispensable to such achievement,” said Rod Alferness, dean of the UC Santa Barbara College of Engineering. “Given to only a single student in the Americas and only three in the world, this award is a major testament not only to Junkai, but also to the kind of students we attract at UCSB and the pioneering spirit they bring to tackling important problems.”

The IEEE Electron Devices Society Ph.D. Student Fellowship Award recognizes a demonstrated ability to perform independent research in the fields of electron devices and a proven history of academic excellence. Among Jiang’s other early-career accomplishments are receipt of the UCSB Graduate Division Dissertation award (2019) and the IEEE S3S Best Student Paper Award (2018). His research contributions have appeared in prestigious international journals, including Nature Electronics, Nano Letters and IEEE Transactions on Electron Devices, as well as leading IEEE conferences such as the annual International Electron Devices Meeting (IEDM) and the International Reliability Physics Symposium (IRPS).

To allow circuit level design and optimization, Jiang also developed a SPICE-compatible compact model for graphene interconnects, which was made available to the worldwide research community via nanoHUB, a well-known educational hub for the nanoelectronics community. His model currently has over 3000 users. In 2018, Jiang was one of the key contributors to the demonstration of the world’s first kinetic inductor, led by Banerjee, that overcame a 200-year old limitation of conventional inductors.

IEEE is the world’s largest technical professional organization for the advancement of technology. The Electron Devices Society (EDS), which began in 1952, is a technical society of the IEEE with more than 11,000 members worldwide.