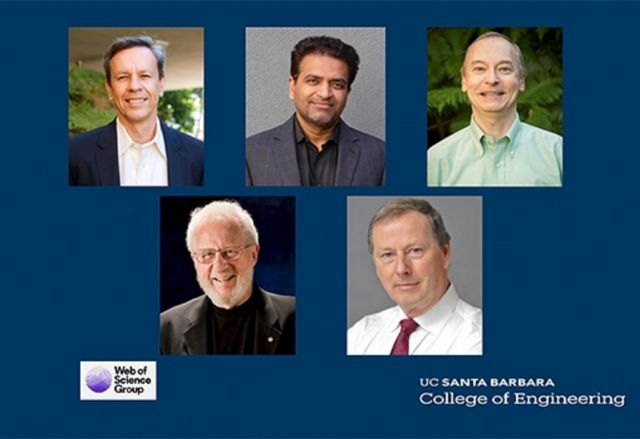 Five professors in UC Santa Barbara’s College of Engineering are among the most influential scientists in the world, according to the 2019 Highly Cited Researchers List released by Clarivate Analytics. Only the top one percent of researchers in each field, in terms of references and citations in journals published from 2008-2018, made the list. Such consistent production of highly cited reports indicates that the work of these researchers has been repeatedly judged by their peers to be of notable significance and utility. Seventeen UCSB researchers earned the recognition, including five affiliated with College of Engineering: Kaustav Banerjee, Guillermo Bazan, Anthony Cheetham, Alan Heeger, and Chris Van de Walle. Approximately 6,200 researchers were named Highly Cited Researchers in 2019, about 3,700 in specific fields and 2,500 for cross-field performance, based on data from the Web of Science, the world’s largest publisher-neutral citation index.

“These five prestigious members of our faculty made discoveries and translated them into applications that have the potential to change the world, from nanoelectronics to materials design,” said Rod Alferness, dean of the UCSB College of Engineering. “The scientific community that has cited their work benefits from their intellectual contributions, and their work propels us toward a brighter future. We are tremendously proud.”

Bazan and Heeger have appeared on the Highly Cited Researchers List in each of the past six years, while Van de Walle was recognized in 2014 and the past three lists.

“The College of Engineering has always been at the cutting edge of new developments that strongly impact technology and society. The fact that five faculty are included on this list confirms the influence that UCSB has on setting research directions within the field,” said Van de Walle, whose group performs computational research to develop a fundamental understanding of the physics and chemistry of materials in order to improve existing materials and discover new ones.

Van de Walle’s publications receive 14,701 citations between 2008-18, according to Web of Science’s database.

“Venturing into new research areas carries risk, but seeing that our seminal papers become highly cited is a wonderful affirmation. It is very gratifying to find out that the directions we chose, such as studying the efficiency of light-emitting diodes or designing novel quantum emitters, have truly impacted the field,” said Van de Walle, an elected member of the National Academy of Engineering (NAE), and a fellow of the Institute of Electrical and Electronics Engineers (IEEE), the American Association for the Advancement of Science (AAAS), the Materials Research Society (MRS), and the American Physical Society (APS).

Banerjee, a professor of electrical and computer engineering and the director of the Nanoelectronics Research Lab at UCSB, was selected in the cross-field category for influence in multiple fields: electronics, materials science, physics, and chemistry. His publications were cited 13,221 times between 2008-18, according to Web of Science.

“It is very gratifying that my ‘atoms to applications’ research approach that cut across multiple disciplines has triggered worldwide R&D activities and excited a whole new generation of students and researchers. I am also glad that my research further boosts the prestige of the College of Engineering and UCSB,” said Banerjee, regarded as one of the world’s leading innovators in the field of nanoelectronics. “Often, the number of highly cited researchers from the Web of Science Group weighs heavily in determining the worldwide rankings of universities and research institutes, because it is considered one of the key indicators of research quality and impact. Hence, it is certainly an important milestone for any contemporary researcher and institution.”

Banerjee’s research focuses on the physics, technology, and applications of two-dimensional materials, such as graphene, for designing next-generation energy-efficient electronics, photonics, and bioelectronics. He invented the kinetic inductor, using graphene to overcome a 200-year old Faraday-limit and pave the way for new ultra-compact wireless communication systems.  Forbes called the inductor a trillion-dollar breakthrough. An elected fellow of the Institute of Electrical and Electronics Engineers (IEEE), American Physical Society (APS), and the American Association for the Advancement of Science (AAAS), Banerjee also received an IEEE Technical Field Award for his pioneering contributions to 3D integrated circuits that are being widely commercialized by major semiconductor companies.

Bazan’s research focuses on the molecular design and synthesis of innovative functional materials that can be used in organic electronics, bioelectrochemical devices, and industrially relevant polymer chemistry. Web of Science data showed that Bazan’s publications were cited 25,736 times between 2008-18. He has received prestigious awards from the American Chemical Society (ACS) and the National Science Foundation, and is a fellow of the Royal Society of Chemistry and the American Association for the Advancement of Science (AAAS).

Cheetham, a professor emeritus from the Materials Department, focused his research on the synthesis and characterization of functional inorganic and hybrid materials. According to Web of Science, his publications have received nearly 15,000 citations between 2008-18. Cheetham is a member of the Royal Society of London and the American Association of Arts and Sciences.